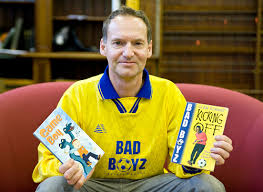 I love sport and I love reading about it – I always have. The best job I’ve had yet was to be the compiler of Sports Stories (now called Score!) in the Kingfisher Story Library. I got to read lots of sports stories and chose the ones I liked best for the book. A piece of cake, you might think. But it wasn’t. I discovered how few stories there are out there about sport, apart from football. At its best, sport is enthralling, dramatic and exciting, it puts you through the emotional mill and leaves you gasping but satisfied – and the best sport stories do much the same. But in the best sport fiction, something is worked out, achieved, that goes beyond the mere winning of a trophy.

Sport plays an important past in people’s lives – young people’s in particular – whether as participant or supporter, which is why it is such a resonant subject for fiction. Perhaps more than any other genre, the sport story gets to the heart of children’s real lives. As well as providing gripping entertainment, it is an excellent medium to deal with issues of substance: bullying, racism, jealousy, lack of self-confidence and esteem, independence, individualism and teamwork, determination, loyalty, friendship, hopes and dreams…

The combination of compelling on-field action and strong emotional content is what has always most drawn me to sports stories – both as reader and writer. I’ve written lots of football stories but they are never just about what happens on the pitch. My Leggs United series, for example, is about family life as much as football – oh, yes, and about a ghost too! See a dramatised extract and interview about writing football stories at http://www.bbc.co.uk/learningzone/clips/alan-durant-spot-the-ball-extract/5318.html). Teamwork and family ties are at the heart of Twin Power for Ever, which was broadcast on BBC School Radio’s Together just prior to the 2010 World Cup. I want the reader to care about the characters and like them as they follow their exploits – on and off the pitch.

Books by Alan about sport:

Football stories by Alan can also be found in the following anthologies:

* It was a lousy draw. A terrible, heartbreaking gut-wrench of a draw. Of all the teams left in the cup, they had to go and get Durnsford. Away. They might as well kiss their dreams goodbye.

* I found the boots under a bush down by the railway.

* That night a strange glimmering figure appeared at the end of my bed. “Wh-who are you?” I stammered.

* The figure pointed a long, almost transparent finger. “You’ll find out soon enough, son,” he uttered in a shivery voice. “Now get your kit on. It’s time to play.”

* “Pass it, pass it, PASS IT!” I screamed. But I may as well have saved my breath. John Plaistow had never passed the ball in his life. And he wasn’t about to start now.